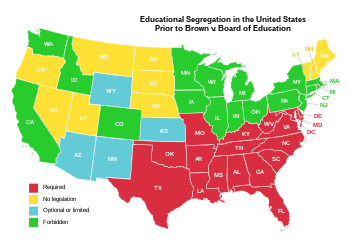 Facts of the Case: One such case dealt with segregation of schools and was an amalgamation of smaller cases involving African American students being denied admittance to certain public schools on the basis of race. Therefore, the case is really Brown et al v Board of Education since it encompasses multiple plaintiffs arguing that school segregation violated the Fourteenth Amendment’s Equal Protection Clause. Citing the Plessy decision, the lower courts upheld de jure segregation of schools holding that the schools may be segregated as long as they were “separate but equal,” and so the case eventually rose up to the US Supreme Court.

Key Question: Does the segregation of public education based solely on race violate the Equal Protection Clause of the Fourteenth Amendment?

“Separate but equal” educational facilities are inherently unequal — which violates the Equal Protection Clause of the Fourteenth Amendment.

Chief Justice Earl Warren delivered the opinion of the unanimous Court. The Court reasoned that the segregation of public education based on race instilled a sense of inferiority that had a hugely detrimental effect on the education and personal growth of African American children. Warren based much of his opinion on information from social science studies rather than court precedent. These studies noted that minority students learn better in mixed-race classrooms and that segregation had detrimental effects on their learning and self-esteem. The decision also used language that was relatively accessible to non-lawyers because Warren felt it was necessary for all Americans to understand its logic.